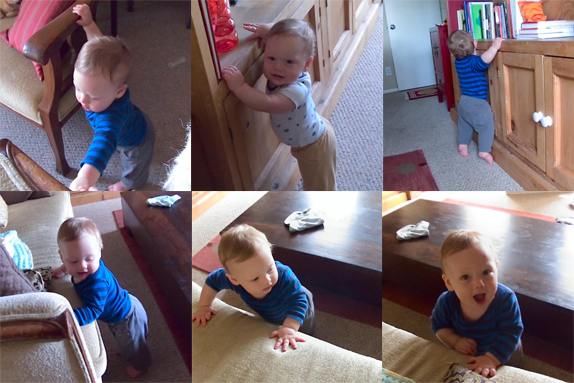 It has been a week of distractions and projectile vomiting, but one thing is certain. The baby is 11 months old. He will be walking very soon.

I know this as an experienced father watching him pivot on one foot and spin gracefully to the floor, except for the part where he clocks the underside of his chin against the table on the way down. It reminds me of the way the novelist Raymond Chandler describes getting punched  – he would write ‘the floor came up to meet me and hit me in the face.’ The phrase captures the surprise on the baby’s face as the table gets in the way of his otherwise graceful descent.

His naps have grown to three hours sometimes, proof that he is building neural pathways like crazy. His eyes are alert to everything around him. He listens and repeats back sounds. He can wave good-bye. He laughs at his own jokes. His skin is soft as a baby’s ass, particularly on his butt. He has outgrown me in hair and will be a better tennis player. I know because he has long legs, long arms, a long torso, and a killer instinct to close a point. Well, I don’t know about that last part, but he can really suck on a tennis ball.

Oh, and I have to assume blame, in part, for the projectile stuff. I tried to bring garlic back into our cooking menu. No dice.

3 thoughts on “waiting to walk”