This week I will turn nine months old. I have been out in the world almost as long as I was inside my mommy.  Perhaps you’re wondering what I’ve been working on. I can answer that question with a little photo essay. The first picture is me playing my mommy’s harmonium. (The harmonium is a relative of the accordion, an Indian adaption of a European instrument.  In India, it was used to accompany Hindu prayers and chanting.) I practice the harmonium every day for one minute. At that rate, given that it requires 10,000 hours of practice to master anything, I will need 600,000 of these short practice sessions to achieve harmonium mastery, which I think I can wrap up in just a few months. (I don’t know how to do math yet.)

The next picture is me finding my mouth. I am starting with yogurt in this picture and, as you can see, it took just a couple of tries. Way faster than learning the harmonium.

The next picture is me practicing my broadcast-ready smile for later in life, for when I am on television (if it is still called television by the time I am on it). Can’t you just hear me saying, ‘Here are today’s top stories. President Malia Obama appointed Lady Gaga Secretary of State today. Secretary Gaga will learn the job from the extremely old yet still coherent former Secretary of State Hillary Clinton.’

The next image is of me in the park, interrupted as I was about to eat some dirt. You can see that I am not pleased about the interruption. I really wanted that dirt. 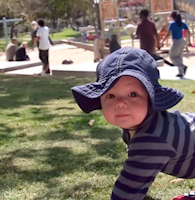 I do not drink coffee, so having business meetings in Starbucks doesn’t work for me. Instead, here I am meeting in the park with my colleague. He has the same name as I do, and that’s what the meeting was about.

It is important to look for bugs.  Remember this because it is good advice. 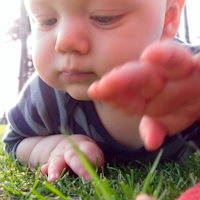 Finally, my parents put me in this contraption. I don’t know what it’s called, but it was a lot of fun.

2 thoughts on “What I am Working on Now”