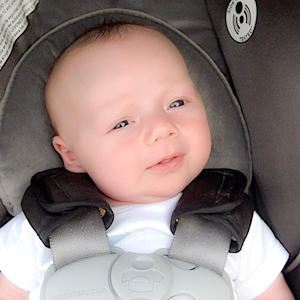 I am only a baby, but I believe there is such a thing as a social contract. Even at the tender age of nine weeks I know that I am part of a collective: that of Humans on Earth. We have to look out for each other, and that is why, when my parents suggested that I get vaccinated, I decided to go along.

Hey, you’re saying, you’re a baby, you had no choice. Au contraire. I could have bitten them, or at least gummed them really hard. I could have cried all night before the doctor’s appointment so that when they tried to drive there the next day, their addled brains would’ve gotten them lost. As they made their way out the door, I could have peed on them, causing them to miss the appointment while they hunted for the Purell. I have a few tricks up my onesie sleeve, you see. But I decided to cooperate.

I will tell you straight up that it was not pleasant. No matter how nice a nurse pretends to be, even if she really means it, she is still sticking something in your flesh, or making you drink something foul, which is not nice. I had a mild reaction. Around here they refer to me as the Vice President of Smiling Occasionally. After the vaccinations, I smiled even less occasionally for a couple of days, and I was crabby. Other than that, no big deal, and I’m glad I did something important.

There are people who don’t get their kids vaccinated because they’re afraid of side effects, or believe the vaccinations contain poisonous mercury, or believe that vaccinations can induce autism. If you check the first few results on Google you will see an array of truths, half-truths and Jenny McCarthy. The famous actress famously made the case for not vaccinating children, basing her opinion partly on research which has been shown to be faked.

Now, despite my proclivity for waking people up at 4:30 in the morning and demanding mother’s milk, I am a reasonable baby. Though there is no mainstream research to prove it that I know of, common sense dictates that you might not want to slam a baby with all the vaccinations recommended by the CDC. I mean, that’s a lot of needles and a lot of chemicals coursing through a system that has known only mamma’s milk, a little formula, and, once, a shot of whiskey that my dad accidentally spilled on me. You can pace things, and you can find pediatricians who believe in that. You can balance your risk of exposure with the (small) risk of vaccination.

I’m asking you to consider the collective, not just your own comfort. The deadly diseases vaccination protects us against haven’t disappeared – they have been suppressed by a national program of vaccination. That’s the social contract I believe in. Smallpox killed nearly 1,000 children a year before a vaccination program killed it. Diphtheria once killed hundreds of thousands of people in the US; by 2002 only one US case was reported. Polio paralyzed tens of thousands. DTAP, a vaccination against Diptheria, tetanus and pertussis (whooping cough) is recommended by many doctors because whooping cough is making a deadly comeback.

All I’m saying is that it’s worth it for babies to have this discussion with their doctor. You might want to take your chances with measles or not get vaccinated against polio right away. You might wait on some vaccines after talking it over. I opted to delay my hepatitis B shot until I am living in the East Village and need a tattoo.

Everybody wants the best for their child, but we are not isolated units, we are families mingling with other families. Find a doctor who can hear you out on your vaccination schedule. If they’re inflexible, maybe you need to find another doctor.

The other day my dad said, ‘Let’s read something. Would you like The Runaway Bunny or Das Kapital?’ I said, ‘Well, one is a well-researched, passionate screed against the abuses of power and the other is a book by Karl Marx which is really hard to find in print. Let’s go with Runaway Bunny.’

There is a difference between being fiercely independent and being disconnected from the needs and values of your community. Vaccination is not a blindly imposed application of power by authority; it’s a voluntary part of the social contract. I think that’s the theme of Runaway Bunny, but I’m not sure. It was naptime and I fell asleep before it was over.

6 thoughts on “Why My Parents Had Me Vaccinated”